Home / Blog / CBG / CBG Effects: What You Need to Know 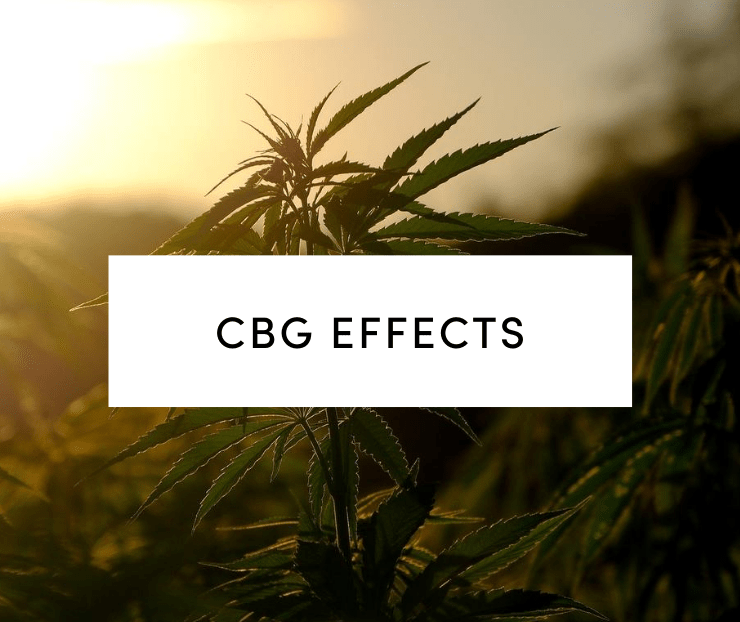 By now, you may have heard a thing or two about cannabis and its chemistry. THC and CBD are the poster children for cannabinoids, chemical compounds found in the cannabis plant. In fact, CBD is now commonly extracted from cannabis and hemp, sold as its own range of plant-based products. But did you know that there are lots of other cannabinoids?

One of the lesser-known cannabinoids is CBG or cannabigerol. Although not found in large quantities in most cannabis strains, it’s still worth learning about. New research increasingly demonstrates CBG’s many desirable effects. This is why consumers and manufacturers are waking up to the reality that CBD isn’t the only effective cannabinoid.

But what exactly is CBG and what are its effects? Well, this post will help answer those exact questions.

Unlike CBD, which is highly concentrated in cannabis, CBG makes up less than 1% of the plant’s cannabinoid profile. These low concentrations of CBG make it quite difficult for scientists and researchers to get a large enough sample to carefully study its properties. But this is not to say that research hasn’t been successful. In fact, some studies discovered that CBG promotes internal CBD production.

Cannabis as a plant is unique in its ability to produce CBGA. This is, essentially, the precursor to three core branches of cannabinoids. The plant also contains natural enzymes, known as synthases, which break down CBGA and mold it into those respective branches. The synthases – CBD-synthase, THC-synthase, and CBC-synthase – are named according to the cannabinoids they help to create.

When any of these cannabinoids are exposed to prolonged UV rays or heat, they lose a CO2 molecule. At this point, they are regarded as the neutral forms of CBD, CBG, CBC, THC, etc. In most medicinal cannabis strains, CBGA is immediately converted into a secondary cannabinoid, so it’s not typically found in large concentrations. But if a strain of cannabis has a high CBGA content, smoking this plant would alter it to the CBG cannabinoid.

With widespread testing of industrial hemp strains of cannabis, we’ve discovered much higher CBG levels than in other cannabis strains. Further studies demonstrate that this phenomenon may be due to a recessive gene. Scientists believe that this gene is responsible for keeping cannabis from producing one of the key cannabinoid synthases, so it could convert the CBGA to one of the major cannabinoid branches.

With this in mind, it’s safe to say that without CBG, we wouldn’t know as much about CBD as we already do. Many other cannabinoids present in hemp might not even reach their concentration levels without CBG. 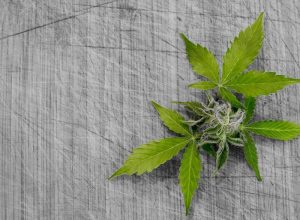 Just like other cannabinoids, CBG influences your endocannabinoid system (ECS). This is a system made up of a complex collection of CB1 and CB2 receptors, enzymes, and chemicals known as endocannabinoids.

Our bodies produce endocannabinoids naturally, and they bind to the CB1 and CB2 receptors. Their role is to help regulate homeostasis (balance) in our physiological functions. CB1 receptors are mostly present in the brain and the central nervous system, and CB2 receptors commonly exist within the immune system cells. There are many different endocannabinoids that can bind with these receptors, but the most well known are 2-arachidonoylglyceroal (2-AG) and anandamide (AEA).

The AEA binds with the CB1 receptors, and typically acts as a neurotransmitter, affecting our mood and cognitive function. 2-AG binds with both CB1 and CB2 receptors, which provokes an anti-inflammatory response. Due to their similar structure, cannabinoids can also bind with these receptors – THC binds with CB1 receptors to alter how you think and give you a “high”. However, CBD doesn’t bind with any of the receptors, though it does influence how they interact with other cannabinoids.

Research demonstrates that CBG specifically binds with CB2 receptors. It also shows that CBG can block other compounds from binding with CB1 receptors, especially in high doses. However, CBG doesn’t seem to alter the effects of THC.

The complex interaction between your body’s ECS and the different plant cannabinoids is referred to as the “entourage effect”. Keep in mind that scientists are only beginning to understand the full implications of this interaction. Many have suggested that using a combination of cannabinoids is more beneficial than only using one.

The Potential Effects of CBG

When CBG is taken through cannabis products, it may offer similar effects as CBD. Some studies have actually found that CBG counteracts the effects of THC, which further strengthens the Entourage Effect argument.

Now, the reports of some suggest that using CBG isolate following a dose of full-spectrum hemp oil could decrease the trace effects of THC if there are any to experience in such small concentrations.

Additionally, early findings suggest that CBG produces its own effects on the body and mind, similar to those we associate with CBD. However, we don’t have current, concrete science to explain how CBG achieves these results. Still, scientists speculate that CBG may inhibit GABA reuptake. And, by limiting GABA reabsorption, your neural synapses may be affected by CBG in a way that works to reduce anxiety, stress, and muscle tension.

As studies are only just beginning on it, we’ll certainly discover more of the effects of CBG as we continue to learn about its characteristics and interactions within the human body. 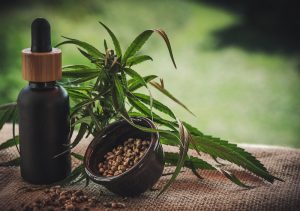 The Anti-inflammatory Effects of CBG

CBG seems to exhibit anti-inflammatory properties. As such, it could potentially help address symptoms of many chronic diseases.

One research studying CBG for inflammatory bowel disease yielded interesting results. The study found out that CBG significantly reduced inflammation in mice with relieved colitis and induced IBD. According to these findings, researchers suggested that CBG should be researched further in human subjects living with IBD.

When scientists are able to confirm CBG’s anti-inflammatory properties, it could be applied in areas beyond the treatment of colitis. In many cases, chronic inflammation is associated with painful conditions like arthritis. It’s also linked with many other serious disorders, including cancer, high blood pressure, diabetes, heart disease, and even depression.

As such, we always seek new ways to reduce inflammation. And, while more research is required, cannabinoids like CBG could offer such hope.

Aside from the antimicrobial and anti-inflammatory effects, the CBG compound can also act as an antioxidant, helping protect the nervous system from damage. This is similar to the properties of the 2-AG endocannabinoid.

An animal study meant to demonstrate the neuroprotective effects of CBG showed some promising results. The study suggested that CBG could help improve motor deficits, while helping preserve neurons, in patients with neurodegenerative conditions like Huntington’s disease.

CBG also shows great promise when it comes to boosting appetite, as scientists discovered in a 2016 research study exploring the effects of CBG on appetite. They gave rats either placebos or CBG and observed their feeding habits. Those rats who took CBG doubled their overall food intake and increased their number of meals. Nonetheless, the duration of meals and the amount the rats ate remained unaffected.

The studies didn’t observe any adverse side effects in the rats who took the CBG. This shows that the cannabinoid could be a promising therapy for conditions like cachexia and anorexia.

Research keeps shedding light on the potential health benefits of CBG. It’s been suggested that, along with influencing the CB1 and CB2 receptors, the CBG compound can affect both the 5-HT1A and α2-adrenoceptors serotonin receptors found in your nervous system.

CBG could also block your cells’ reuptake of the noradrenaline neurotransmitter. If this proves true, CBG might be helpful in fighting the symptoms of depression.

The Future of CBG

After spending years as a controlled substance, cannabis may finally be moving in the direction of more popularity with its wide range of potential health benefits. And this could lead to new opportunities for the many cannabinoids that the cannabis plant has to offer, including CBG. While more extensive research and data is needed to fully understand the wide range of CBG benefits, early indications may show promise to what CBG has to offer. 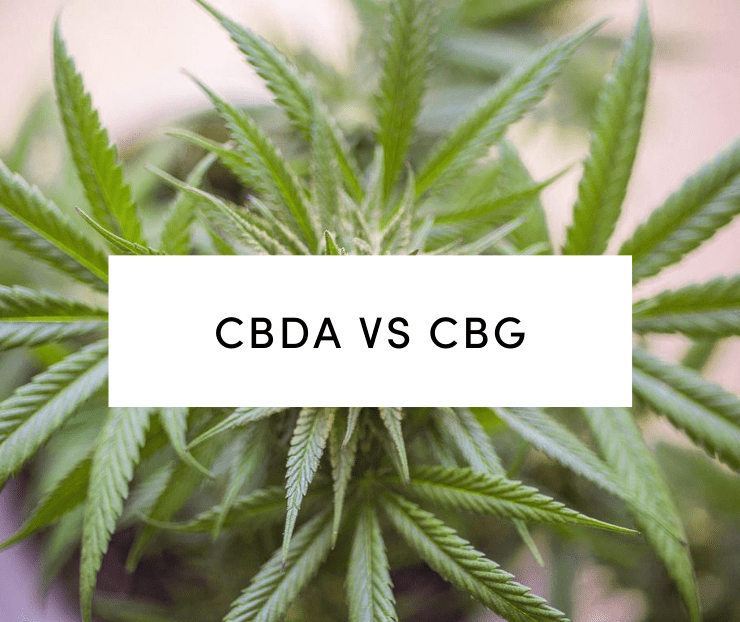