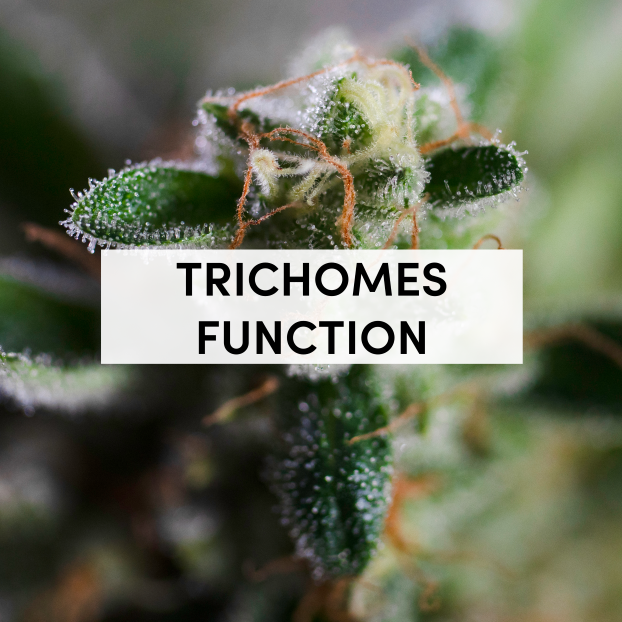 If you delve into the cannabis hobby long enough, you’ll most certainly hear the name ‘trichome’ thrown around. Also, if you are like most people, you have not a clue of what that means. In spite of their low public profile, trichomes contain some of the most important compounds in cannabis plants. Up next is an in-depth look at trichomes and trichomes functions.

If curiosity ever got the better of you and you tried to learn everything about cannabis, trichomes would be one of the first terms you would research. The term might sound like one of the numerous chemical compounds found in cannabis plants. It’s natural to think it is just another compound like terpenes, flavonoids, or cannabinoids are. However, the fact of the matter is that all these compounds actually come from trichomes.

Trichomes perform key tasks throughout the development of a cannabis plant. They also play an equally significant role in determining the quality of cannabis strains. But don’t just start searching for the cannabis strain that has the “best” trichomes. First, you need to learn more about trichomes in general and trichomes functions. 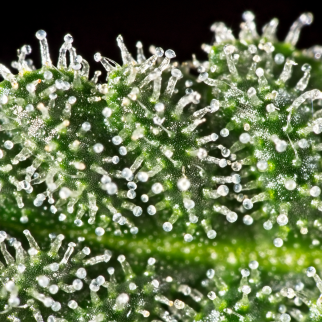 Trichomes, in botanical terms, are the scale-like or hair-like outgrowths from the epidermal cell surface of various microorganisms, plant cells, and algae. The term “trichome” traces its origins back to the Greek word “trikhōma” which means “to cover with hair”. Trichomes can be either “glandular” or “non-glandular”. The former secretes oils and other natural substances, while the latter does not produce secretions.

Look at a cannabis bud with your naked eye. The trichomes are the clear, amber, or white flecks found on the outside of the flowers that appear glittery or dusty. Enthusiast and manufacturers alike use trichomes in a wide variety of cannabis preparations. When touched, trichomes are resinous and sticky, and the residue usually lingers on the skin and other surfaces for quite a while.

Trichomes are essentially the structures that not only produce but also store various cannabis compounds. Cannabinoids, flavonoids, and terpenes, trichomes are responsible for producing and holding them.

Trichomes, just like other similar growths present in plants, serve multiple purposes. They contain many desirable compounds, usually in the form of a viscous resin. But not only that, but they also play a critical role in the plant’s defense. In fact, protection is one of the most important of trichomes functions. Let’s see in detail just how they do that.

Protection Against the Elements

Female cannabis plants are particularly fragile during the flowering stage when exposed to the elements. Wind, UV light, and heat are all factors that are a threat to an unprotected plant. Luckily, trichomes make sure that they are safe from all of those.

Trichomes cover enough of the plant’s surface to keep it cool and are biologically engineered to fend off UV rays. Simultaneously, trichomes provide protection from damage the wind might cause to the plant’s integrity.

Protection Against Pests and Animals

Trichomes not only fight off the elements but also fend off pests and animals. Cannabis, just like any other flowering plant, can be very attractive for creatures looking to take a bite. Fortunately, the compounds trichomes produce are something pests, and animals do not find palatable. They not only have a bitter taste but also give off a very strong aroma. Both insects and animals are not fond of either; thus, the plant remains very safe from them.

As mentioned, there are two main types of trichomes that actually subdivide into more specific variations. Some are more common on cannabis plants, but all of them play a critical role in whichever plant they are on. The two major classes in which trichomes divide are glandular and non-glandular trichomes.

The capitate-stalked trichomes measure between 50 and 100 micrometers wide and are the largest of the glandular trichomes. You will usually notice them when looking at some high-quality buds. Each one has a fairly bulky stalk, upon which rests a large gland rich in terpenes and cannabinoids.

The bulbous trichomes, unlike what their name might suggest, are essentially microscopic in size. They measure between 10 and 15 micrometers wide. This kind doesn’t have a stalk; rather, it usually covers the plant’s entire surface. Since they are so small in size, they have minimal capacity and, thus, hold less of the same compounds as the other two.

Non-glandular trichomes are those that do not have a gland. Thus, they cannot secrete the compounds that trichomes are famous for. However, they still have their uses.

The unicellular trichomes help protect the plant from both water loss and extreme temperatures. They start out covering the seedling and later appear on the underside of the leaves. Just like their name might suggest, they are single-celled, and you would need a microscope to see them.

The cystolithic Trichomes usually appear early during the development cannabis plant. They are similar in appearance to the unicellular trichomes. However, they are larger and have special outgrowth on their cell walls, which leaves them rough to the touch. Speculation currently points out they serve as a sort of psychical protection from insects. 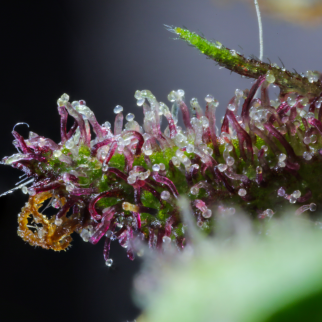 When Do Trichomes Typically Appear on Cannabis Plants?

Trichomes appear on cannabis very early on, albeit in smaller quantities; oftentimes, they won’t be visible to the naked eye. Trichomes usually increase in quantity as the plant ages and become most noticeable when it blooms.

The denser the trichomes are, the better it is for most growers. If you originally started out with the best seeds, trichomes should be visible on the leaves and buds towards the end of bloom. It can give your blooms a white or silvery appearance. If you squeeze the buds, the terpenes and oils in the resin head will burst to give off a great aroma.

How Do Trichomes Help in the Creation of Cannabis Compounds?

Through biosynthesis. That the name of a process in which complex structures come out of simple ones. Trichomes, the simpler structure, will actually secrete terpenes, cannabinoids, and flavonoids inside of it.

During biosynthesis, there are three basic steps that take place in trichomes to produce such cannabis compounds:

It refers to when microscopic enzymes bind 1 or 2 small molecules, which are known as substrates.

It refers to when substrates attach to one another, triggering a chemical conversion of the substrates.

It refers to when the transformed substrate passes on to a different enzyme. There, further processing happens and subsequent changes too.

How Do You Check the Production of Trichomes?

Most cannabis growers use small magnifying glasses to examine their plants to make it easier to see the developing trichomes. Some growers also rely on aroma and monitor their plants according to the changes in the aroma’s intensity and scent.

If you chose your cannabis seeds wisely or are growing cannabis from a clone of a mother plant, you will observe that the production of trichomes steadily increases as harvest time approaches. The sighting of them is a great sign pointing towards the growth of a high-quality cannabis plant.

The vast majority of CBD users don’t ever give much thought to the complexity involved in its creation. They mostly just want to enjoy their product. However, the reality is that the many therapeutic effects of CBD would be impossible to enjoy were it not for the trichomes functions.

Now you know about the biological processes of the cannabis plant involving trichomes. Thus, you know a bit more about your favorite compounds CBD, THC, or any of the other hundreds of cannabinoids. They are all compounds that begin with the trichomes functions and ends with a finished product you can enjoy.

Here’s What You Need to Know About Trichomes Function 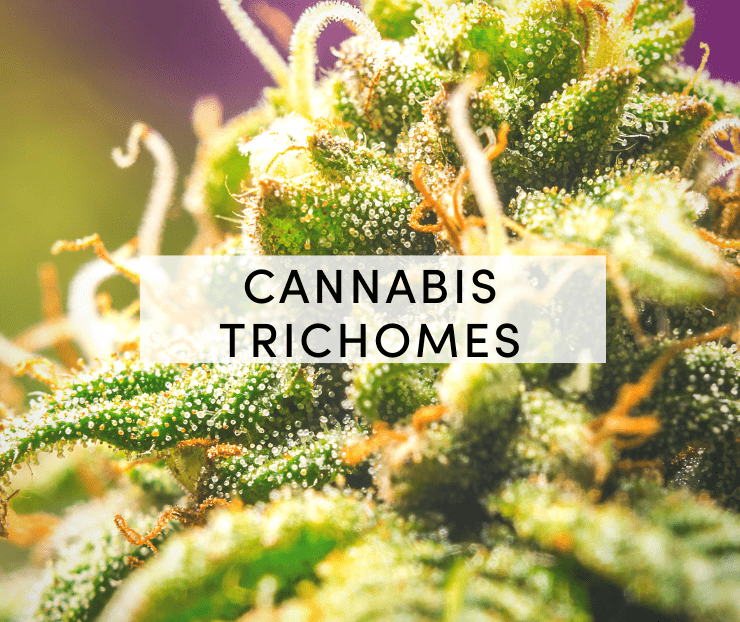 CBD Trichomes vs THC Trichomes: Is There a Difference? 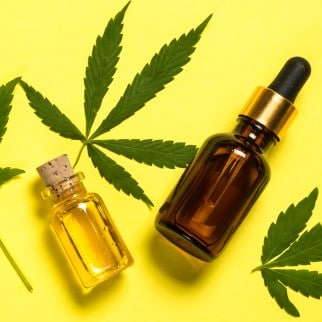