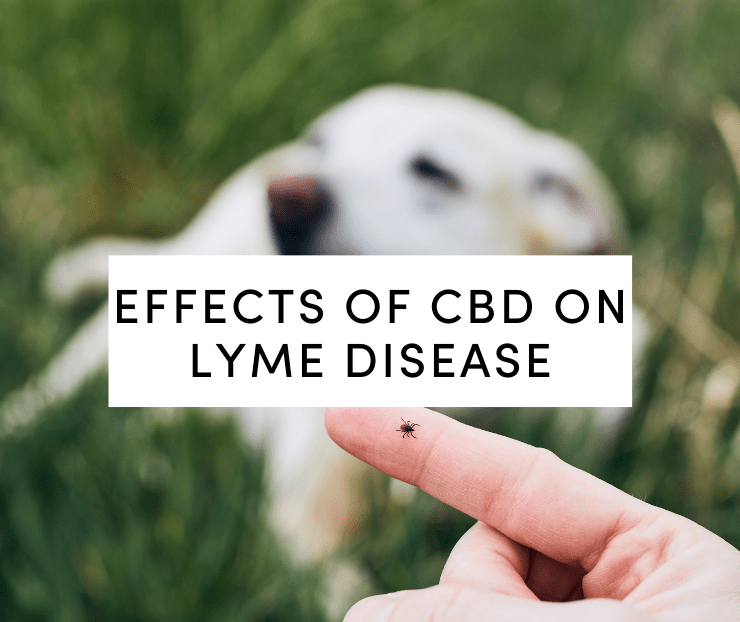 Lyme disease has been growing to almost pandemic proportions, with over 300,000 cases of the condition per year. As CBD research also continues to grow, it makes sense to ask what the effects of CBD on Lyme disease might be. With little funding for research and given that only half of the people infected show a rash, it’s no wonder the disease has been able to boom so quickly and steadily. Unless caught in the initial stages, antibiotics prove to be ineffective, not to mention they may kill the good bacteria found in the gut. Because of this, trying antibiotics too late can potentially worsen your immune system’s ability to fight the infection created by Lyme Disease.

What is Lyme Disease?

Lyme disease is a bacterial infection usually caused by tick bites; specifically deer ticks. It’s also referred to as Lyme borreliosis, and the bacteria responsible attacks the organs of the infected over the course of 3 stages. Lyme disease can cause long-lasting and life-threatening complications if not promptly handled by a doctor.

Recently, it has been discovered that CBD may hold benefits and can be used by those affected by the condition. This is early stage discovery, and you must speak with your doctor if you have Lyme Disease. But, you may ask yourself just how does CBD work? In this read, we are going to dive deeper into the causes and symptoms of Lyme disease and how cannabidiol (CBD) can potentially affect the treatment of the infection, and it may not — early science is looking into it. We shall also explore if CBD is indeed a revolutionary form of alleviating this condition.

Lyme disease has been referred to as ‘The Great Imitator’ due to how easily the condition’s symptoms can be confused with other ailments. More often than not, it is transmitted by small, immature ticks in the nymph phase. If you do not see the tick that led to the infection, it’s hard to tell the source of the confusing symptoms. Part of the issue is that these symptoms are prevalent in many common diseases. 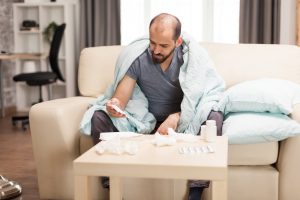 -A bull’s eye rash around the infection site

Fortunately, CBD has been showing promising signs as a possible way to potentially address some symptoms related.

One of the primary Lyme disease symptoms is widespread inflammation. The inflammation can occur in the muscles, cardiovascular system, brain, but joints are the most prominent location for this symptom. Joint inflammation usually causes pain and movement issues that can be very uncomfortable.

The many cannabinoids found in full-spectrum CBD extract have been shown to have strong anti-inflammatory properties. Cannabidiol for joint pain has become a common remedy due to its ability to modulate our immune response and alleviate inflammation.

Increased body temperature is one of the ways that the immune system responds to the bacteria responsible for Lyme disease. Extended chronic fever runs the risk of causing severe harm to your internal organs.

Studies on the immunomodulatory effects of CBD have been well-documented. Boosting communication within the immune system as well as suppressing fever response are some of the ways cannabidiol may help with the fever that comes with Lyme disease.

Nausea can be a chronic issue for people carrying the Borrelia bacteria. This can lead to dizziness and vomiting. One of the most common uses for CBD is for the side effects of patients undergoing chemotherapy. Specifically, it is used for the commonly reported experience of nausea due to these drugs.

In addition to the joint pain that comes from the inflammation around the joints, there are many other ways that Lyme disease can cause extreme discomfort. You are likely to experience intense body and muscle aches and neuropathic pain.

One of the most impressive properties of CBD is that it can provide peace of mind. Cannabidiol and other cannabinoids found in full-spectrum hemp can change the way our brains perceive pain.

Extreme exhaustion is another common symptom of people with Lyme disease. Without a doubt, this is due to the combination of all the varying symptoms that are painful and discomforting. Fatigue is also a result of the condition robbing patients of their sleep.

Rest is vital for muscle regeneration and healing. Restless nights mean that you’ll have a harder time recovering from the condition. Fortunately, cannabidiol is an excellent addition to your rest and sleep routine without too much effort. Studies have shown that CBD may have an effect on sleeping hormones. For this reason, it is advisable to watch your dosage if you don’t want to become drowsy during the day.

Although less common than the aforementioned symptoms, individuals who have been infected with Lyme disease may experience occasional seizures. CBD for seizures is one of the most dramatic and researched therapeutic benefits of the cannabinoid. Experts are starting to recommend using cannabidiol for seizures both at the occurrence of an episode as well as a preventative measure.

The problem is that the condition isn’t often discovered until the symptoms start showing. At this stage, the bacteria are spread throughout the body and become harder to target.

The Repercussions of Using Antibiotics in the Long Term

By the time most individuals notice Lyme disease symptoms, it is usually too late for a prompt solution. During this stage, antibiotics are barely able to completely get rid of the culprit bacteria. The result is that most practitioners will prescribe long-term antibiotic treatments in order to keep the condition at bay.

The problem is that using antibiotics for an extended period can be detrimental to your health. One of the many reasons to avoid this form of treatment is the risk of killing gut flora or good bacteria.

The good bacteria found in the gastrointestinal tract are usually collateral damage in the antibiotic treatment of the condition. The gut is central to your immune health, so upsetting this balance could end up severely damaging your natural immunity and making you susceptible to an array of diseases and infections. 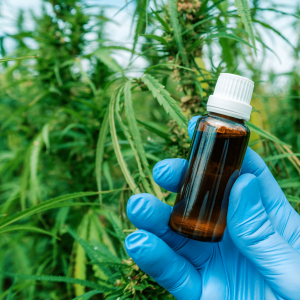 CBD As An Antibiotic

According to studies, cannabidiol has the potential to treat a wide array of bacterial infections, and Lyme disease is no exception. In fact, many cannabinoids like THC, CBG, CBC, and CBD have been shown to have strong antibiotic effects. This is early stage discovery, but very promising.

CBD not only has the potential to treat Lyme disease, but there’s potential that it can even boost the effects of other broad-spectrum antibiotics commonly used to treat the infection. This is why your doctor needs to know if you are taking CBD, or plan too. They need to determine conflicts, because CBD does something to your body, and researches are still trying to prove exactly what it is doing.

According to a study conducted by the London Metropolitan University: “When CBD was applied in conjunction with other antibiotics, it boosted the effects of some of them, depending on the type of the bacteria.” As such, combining CBD with certain antibiotics can potentially amplify the effects, and possibly reduce resistance to antibiotics — consult your doctor if you take anything prescribed if you plan to take CBD.

Perhaps the best way to treat Lyme disease is through prevention. As mentioned earlier, detection can be hard once the ticks disappear. When it comes to Lyme disease, preventing the infection from occurring, rather than treating it, is your best bet.

Ticks are usually found in bushy, tall grass, heavily wooded places, and on animals. So whenever you’re in these places or come into contact with pets, it is imperative to check for ticks afterward. Also, be careful when removing these critters. They hold on tight, and you may end up leaving the head when ripping them out. This can still lead to an infection.

There are also numerous ways to repel ticks. You may want to experiment with essential oils and natural products to keep ticks at bay. Insect repellent containing DEET is also effective in preventing ticks from biting you.

Dosage For Best Effects of CBD on Lyme Disease

The primary determining factor of how much CBD you require depends on the severity of the infection. 25 milligrams per day is being considered by users as a maintenance dosage for healthy individuals with minor pains, or mild stress, or even those with depression have found CBD helps their day like a Vitamin C tablet may. If you have a more severe condition such as Lyme disease in the early stages, you’ll need to consult with your doctor and ask if increasing your CBD intake is a good idea.

Taking between 60 and 100 milligrams should be the maximum per day. You can take CBD between one and three times a day, but with higher dosages, it’s best to spread it out over the day with 3 dosages verses all at once. Some people prefer taking CBD at bedtime, and those who take a little throughout the day like doing so vs. at night. It’s all about finding what is right for you.

According to studies, you can’t physically overdose on cannabidiol. Additionally, very few adverse side effects have been identified with CBD users, unlike many pharmaceutical medications. As such, don’t feel scared to experiment with the dosage amount. Just remember, anything over 100mg is potentially wasteful. We understand that our bodies will only use what it wants, and push the remainder out to waste. Once the body is used to the CBD, there’s a good chance you’ll also feel much better and determine exactly how much you require over time.

As usual, full-spectrum CBD oil is recommended as it contains traces of other cannabinoids, and terpenes that may have other benefits. These work together to lend a synergistic effect, and thus potentially improve the efficacy. In more severe cases of the condition where there is pain involved, patients under doctor treatment may ideally take THC in conjunction with CBD. If you do not have a problem with THC’s psychotropic effects, and you are in a legal state where THC can be prescribed do not be afraid to try a 50/50 THC and CBD combination. You must be speaking with your doctor at this point, and as always, consult your doctor!

As you can see, CBD may be extremely beneficial in addressing the symptoms related to Lyme disease. It may work, it is safe in small doses, more accessible, and may provide benefits, and may contradict antibiotics, so do yourself a favor and speak with your doctor if you have Lyme Disease.