Home / Blog / CBG / CBG And Psoriasis: Understanding the Relationship Between Them

CBG And Psoriasis: Understanding the Relationship Between Them 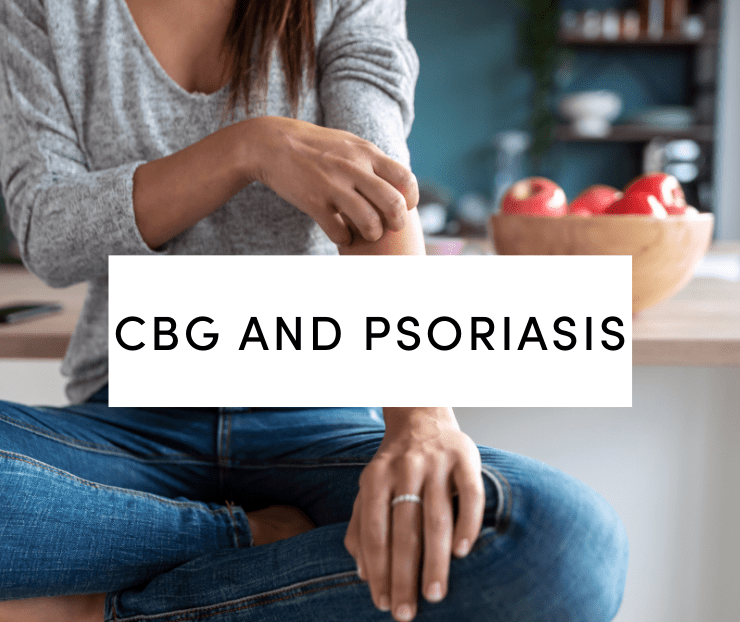 Cannabis and hemp offer a great natural resource of plant-based therapeutics. You’re likely familiar with THC and CBD, the two most popular cannabinoids extracted from cannabis. They’ve received such mainstream awareness due to their potential therapeutic benefits, which have proven to be quite versatile in addressing symptoms of an array of conditions. These cannabinoids are also the most researched with anecdotal evidence and clinical trials proving most of their purported benefits. However, clinical trials, scientific studies, and research into THC and CBD are still progressing.  CBG is among the lesser-known compounds derived from the marijuana plant. It has, however, emerged to show promise as a viable treatment option for skin conditions like psoriasis. Let’s start with a better understanding of both CBG and psoriasis. 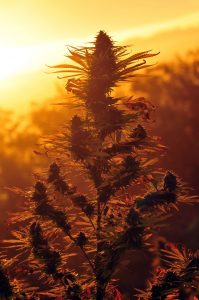 Breakdown of CBGa results in the formation of THCa and CBDa, which then convert into psychoactive THC and CBD through heat. One thing about CBG’s cycle is that it converts into other things almost immediately. This, in turn, makes the compound hard to locate in abundance. Cannabigerol hasn’t received a lot of attention like THC and CBD since it is less than 1% in concentration in cannabis plants with high concentrations of THC. This is because CBG inhibits THC production in cannabis.

CBG can also level out THC’s psychological effects. Nonetheless, CBG is the most abundant compound in the early phases of growth. High CBG content is usually in its acidic form (CBG-A). Cannabigerol can be said to be ‘a mother’ of THC and CBD, because before these compounds can exist, cannabigerol must create them. The acidic form of CBG often changes into cannabinoids such as CBC-A, THC-A, and CBD-A. CBG-A is considered to be somewhat of a “stem cell” since it transforms into a wide selection of varying cannabinoids.

These days, there is increasing evidence supporting the use of cannabigerol on its own to assist patients with skin conditions. Cannabigerol has been shown to be an active compound that affects the skin and may fight against conditions like psoriasis. An advantage of using CBG is that you won’t get stoned from this cannabinoid. In fact you won’t experience any intoxicating effects that may affect your daily routines. 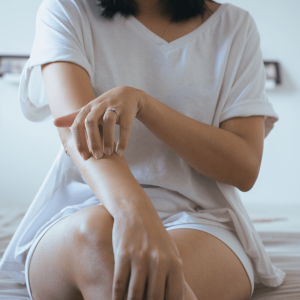 Psoriasis is a non-contagious autoimmune skin disease that results in the buildup of red, thick, and dry patches with silvery scales on the skin surface. The patches can appear on any body part, but usually form on the face and scalp, back, knees, elbows, feet, and palms.

Psoriasis occurs due to a condition that messes with the immune system of the body. Cell turnover is the process whereby skin cells that grow in the dermis rise up to the epidermis. The process typically takes about a month, but for somebody with psoriasis, new cells will come to be in a matter of days. This leads to dead skin tissue buildup because the epidermis is unable to shed skin cells faster than it overproduces new cells.

The condition mainly happens in adults and the locations of psoriasis patches varies between people. Some might develop red skin patches with silvery scales, while some may experience dry and cracked skin that tends to bleed. The psoriasis patches can be painful and itchy. The seriousness of psoriasis symptoms usually fluctuates. One might experience flare-ups that can last weeks or months at a time. Dry skin, stress, infections, and certain medications can also worsen the symptoms.

Psoriasis can also result in psoriatic arthritis. This is a condition that causes stiff and swollen joints and ridged or thickened nails it causes. In fact, the National Psoriasis Foundation suggests that 30% of people with psoriasis are at risk of developing psoriatic arthritis. This happens when the body’s immune system starts attacking healthy cells and tissue, which leads to skin cell overproduction and joint inflammation. This can affect joints throughout the body, including fingers and the spine. There are some similarities in these symptoms and those of rheumatoid arthritis. What’s more, the condition can result in pain in the lower back and feet, and also swollen toes and fingers.

Psoriasis currently has no cure, and exactly what causes the T-cell attack on healthy skin tissues is still uncertain. So far, CBG shows promise as a natural product that may mitigate the onset of psoriasis and its associated symptoms.

CBG And The Endocannabinoid System

Psoriasis generally involves the body’s immune system. And from studies conducted, the ECS binds with receptors in our immune system, thereby regulating many physiological functions. The primary role of the ECS is controlling cell differentiation, proliferation tolerance, balance, and death. It’s not hard to see how directly it can relate to dermatology and skin cell issues.

Studies show that human skin has cannabinoid receptors. It has also been verified that our bodies produce a cannabinoid called anandamide that regulates epidermal cell differentiation. CBG may play a role in cell differentiation and proliferation. It could effectively restrict T-cells’ overactivity, thus playing a therapeutic role in treating psoriasis.

This autoimmune disease is characterized by skin cell overproduction and includes the proliferation of keratinocyte. These cells will develop and form scale-like patches on the surface of the skin. From there, they will result in redness and inflammation. Inflammation occurs when white blood cells see the skin cells as foreign and start attacking. The Journal of Dermatological Science in 2007 published a report detailing the effects that various cannabinoids have on keratinocyte proliferation. It concluded that CBD, CBN, THC, and CBG show promise when treating psoriasis due to them inhibiting keratinocyte proliferation.

The Bottom Line on CBD And Psoriasis

Psoriasis is an immune-mediated condition approximated to affect over 125 million individuals globally. The extensive skin lesions often result in pain, scaling, and itching. In addition to the obvious physical discomfort, the psychological impacts too dangerous to ignore them. Stress about your appearance and health can increase the chances of contracting chronic and other acute illnesses. While there are several purported treatment choices for psoriasis, the side effects of popular chemical formulas used to make these medicines have more adverse effects compared to the benefits linked with them.

CBG is a natural and organic compound that could help manage your psoriasis with minimal to no side effects. With an array of distinguishable merits, CBG appears to be helpful for some individuals with psoriasis. It appears to work by suppressing the skin cell proliferation neurons and inflammation-inducing agents consistent with the condition. It may also have an effect on related symptoms, particularly pain and depression management. So if you’re thinking about using CBG oil as an option for managing your psoriasis condition, it’s certainly worth considering, assuming you speak to your doctor first.

Other than managing psoriasis, CBG is said to help stimulate brain cell regeneration (and growth of new cells), relieve pain, reduce inflammation, stimulate bone growth, and relieve glaucoma symptoms. It may also mediate bladder dysfunction, and early research suggests it contains both anti-tumor and antibacterial properties. Although CBG is proving to be a useful tool in relieving psoriasis symptoms, more research into CBG and psoriasis needs to be conducted. With more studies, clinical trials, and successful results, CBG has the potential to overtake the more prevalent cannabinoids in the market. And like any other treatment, you should consult with your medical practitioner if you’re considering using it with psoriasis.