CBD With THC – Is It Better With It?

Unless you’ve been paying close attention to it over the past couple of years, it seems like CBD came out of nowhere. All of a sudden, seemingly everyone was talking about it and trying some out as well. It only took some enthusiasts sharing their experience online while showing a link to official research to back their claims and, BAM, market boom.

Among people just entering the CBD world, it’s pretty normal to hear their shock at finding out it comes from cannabis. When people hear of cannabis, they tend to assume it’s marijuana and begin to worry about the legality of the whole thing. A little more research would quickly reveal to them that there is nothing to worry about.

The primary source of CBD is the industrial hemp plant which just so happens to be a separate variety of cannabis. What makes industrial hemp different from cannabis has to do with THC, a compound found in marijuana.

Both CBD and THC belong to the same family of compounds; thus, the cannabis plant holds both of these compounds. However, depending on which variety we are talking about, the amount of both varies significantly. The amount of THC, particularly, is very important since it hinges on the fact if the plant is actually potentially illegal in some parts of the US. That said, consuming CBD with THC is nothing out of the ordinary. In fact, the presence of some THC might actually boost CBD’s effects! Keep reading to find out how that works.

What Are CBD and THC? 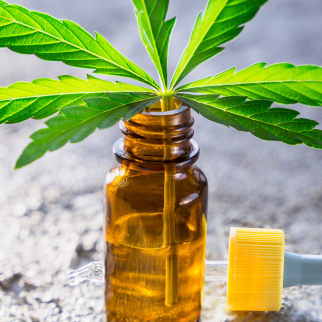 In general, the cannabis plants hold more than 500 compounds, from which around a hundred are called ‘cannabinoids. The compound CBD, short for ‘cannabidiol,’ is one of the most abundant cannabinoids present within it.

THC, short for tetrahydrocannabinol, is another very abundant cannabinoid. In fact, it’s the most abundant cannabinoid found in the marijuana variety of cannabis. The most salient aspect of THC is that it is strongly psychoactive. The fact that marijuana actually holds a high percentage of it it’s the sole reason why you get high when you consume it.

The impairment marijuana causes you when you get high is enough to turn some people off despite its other, much beneficial effect. For those people, CBD can very well be just what they were looking for since it’s entirely non-psychoactive. Thus, you will never get high from it while enjoying its therapeutic effects.

Although THC and CBD are present together in all kinds of cannabis plants yet, specific strains of cannabis might hold higher amounts of one while very little of the other.

Marijuana, for example, holds negligible amounts of CBD and around 10% to 13% THC, which is enough to get you stoned. What makes industrial hemp particularly noteworthy is that it holds 12% to 18% and only around 0.3% of THC.

Whether it’s derived from hemp or marijuana, CBD’s effects and chemical composition remain the same.

As defined by the 2018 farm bill, any cannabis plant containing 0.3%or less THC by dry weight is considered industrial hemp and is, therefore, legal federally as contemplated by this bill. However, the bill also allows for each state to come up with its own laws rather than force them to adopt the federal law. Thus, why you still see some states where all forms of cannabis, hemp included, are illegal. Always research the CBD laws of the state you are presently located in if you are looking to consume some.

CBD With THC vs. CBD with Zero THC

As a product, CBD comes in many different presentations; there are oil, gummies, creams, vape liquids, and a whole lot more. Besides the form it takes, manufacturers also differentiate them based on their chemical composition. You can stumble upon ‘full-spectrum CBD’, ‘broad-spectrum CBD’, and ‘CBD isolate’.

Broad-spectrum CBD is similar, but they specifically remove all of the THC from it, leaving all the other cannabinoids in place. Typically, broad-spectrum CBD products contain zero or trace THC amounts. However, there should be less than 0.3% THC in full-spectrum products.

On the other hand, we have CBD isolate, which it’s entirely CBD and CBD alone. To get isolates, the manufacturers make sure to remove all the other compounds, including all other cannabinoids. CBD isolate comes as a white crystalline form of CBD they usually grind up and sell as powder.

Full-spectrum CBD and, to a lesser extent, broad-spectrum products might have a higher probability of enhanced therapeutic effects compared to isolates. Why? Due to a little something enthusiast refer as the ‘entourage effect’ which you got more chance of experiencing by taking CBD with THC.

Why Should You Use CBD Isolate?

As aforementioned, CBD isolate is the purest CBD form. It might be a perfect product for beginners who are looking to try out the potential therapeutic effects. Since CBD isolate is refined, it contains no discernible odor taste.

Based on a certain animal study, CBD isolate might provide certain health advantages. Yet, the overall effects might be less notable than when taking a full-spectrum CBD product. Additionally, the research shows that CBD isolate’s impacts against inflammation and pain might only occur at a particular dose. This is quite different from full-spectrum products which effects increase with an increase in dosage.

Because of this, people who want to take high CBD doses might opt for a CBD isolate. This isn’t necessarily a bad quality CBD product. Generally, some users might opt for a product with zero THC due to wanting to take no risk with the substance.

Since there’s zero THC in isolates, there’s virtually no chance that it shows up in a drug test. Nevertheless, users should be extra cautious when buying CBD products. Remember, items containing a THC-free label might still have traces of the compound. Carefully reading third-party tests, packaging, and labels will help ensure a user gets all the necessary information to avoid any issue. Also, do an internet search on the manufacturer you are thinking of buying from as a background check. Read what their past customer is saying to assess if they are worthy of your money. For all the assurance zero THC might provide to some people, there are some advantages to taking CBD with THC, as we are about to see.

Why Should You Use Full-Spectrum CBD?

Since full-spectrum CBD consists of all cannabinoids within the cannabis plant, it might have a more potent effect compared to pure CBD. According to research, CBD’s therapeutic effects might be more potent when the product retains all the plant compounds. This what enthusiast and later researchers began referring to as the “entourage effect.”

The current theory postures that the presence of all the compounds from the plant boosts CBD’s effect due to them working synergistically. Meaning they interact with one another, and the results of that interaction end up boosting their overall effect on you.

A certain 2018 study discovered that ingesting CBD might end up having some also neuroprotective effects on you. A different study also concluded that full-spectrum CBD is generally more effective for pain compared to CBD isolate. It also determined that this was primarily because of the combined effects of THC and CBD. It is also worth remarking that full-spectrum CBD is more natural and less processed than CBD isolate.

CBD With THC – Does This Work?

It does this through the regulation of key functions like sleep, mood, and pain sensation, among others. THC and CBD, being the more abundant phytocannabinoids, have their own large effects on the ECS. Unless specifically removed, you are likely to always consume CBD with THC.

This is not a bad thing at all, as we already discussed with the entourage effect situation. Some research so concludes that consuming them together along with other organic compounds like terpenes or terpenoids boosts the CBD’s effect.

Thus, the theory basically says that all compounds in cannabis plants are meant to work together. If they remain together even after processing into a CBD product, they’ll create a more powerful effect than CBD alone would.

Is CBD Beneficial Without THC?

Although some people will prefer to use CBD with THC, others will not. Despite this, there’s still enough evidence that suggests CBD might still be useful by itself.

In case you’re looking to try CBD but with zero THC, go for a CBD isolate product instead of a full-spectrum product. Although the effects of isolates will never be as potent as full-spectrum, it might still deliver relief without the risk of THC, which so many people still strongly dislike.

CBD with THC – The Takeaway

CBD with THC along with terpenoids, and the other cannabinoids apparently interact with each other, boosting its final effect. The interaction goes by the name ‘entourage effect.’ Research on it seems to confirm that, yes, consuming CBD with THC is more beneficial than taking solely the former. Studies are still ongoing, but based on the anecdotal evidence from enthusiasts, it’s likely that CBD with THC remains the preferred choice. 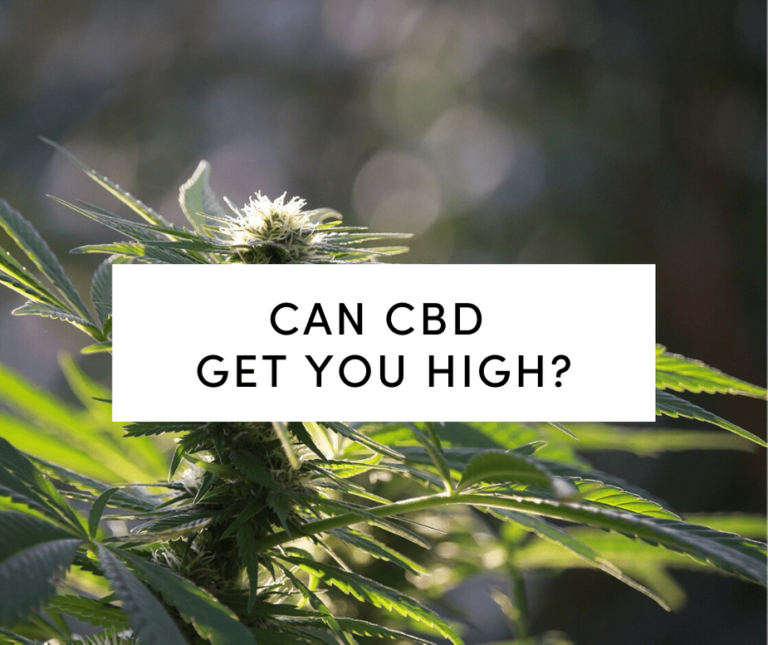 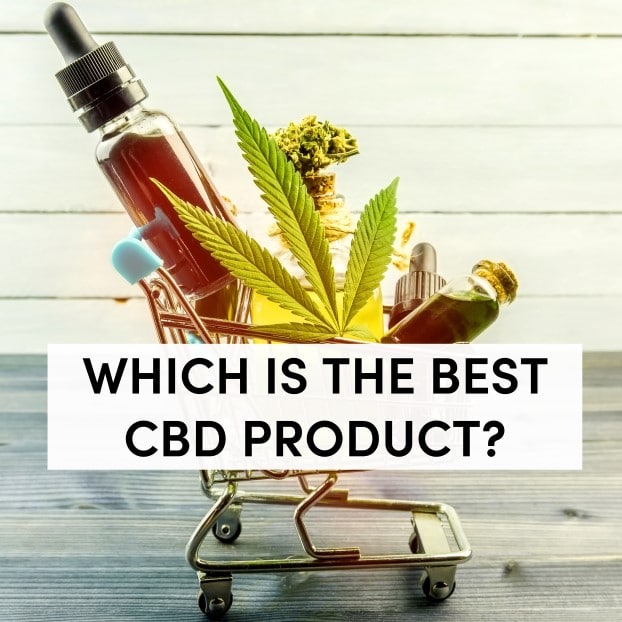